The Lahore High Court on Saturday 22nd March, 2014 declared that the National Testing Service (NTS) a private test conducting firm is illegal and Lahore High Court also directed the Higher Education Commission to make it sure that no private firms is going to conduct test because National Testing Service was not constituted through proper legislation. Justice Mansoor Ali Shah of the Lahore High Court issued the proper order on a petitions which filed by Syeda Anam Ilyas, who is Ph.D candidate, challenging the ‘illegal status of the NTS and the tests which conduct by NTS for admissions and scholarships for higher education in ad outside the country”. On Saturday 22nd March, 2014 the Lahore High Court strictly directed the Higher Education Commission that not to sponsor NTS, because it is not officially approved for national service. LHC further said that not any universities or academic institutions recognized by the HEC were legally obliged to accept the tests given by the NTS or were bound by the test results in granting admissions or scholarships to students. 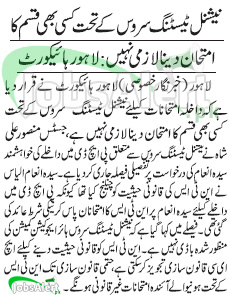 The judge Mansoor Ali Shah said that until a proper department for conducting the tests is going held, till then HEC would not appoint NTS for any test under the ordinance. Justice Mansoor Ali Shah observed that all the admissions and scholarships which any university wants to give to their students were not to be made dependent on NTS test results and he also issued notice to HEC to display this order on its website.

Further Justice Mansoor Ali Shah said that all the admissions and scholarships which were granted or refused on the basis of the tests conducted by NTS is the part of Past and that is not going to be reopened till the NTS is not going to approved themselves legal according the rules till 30th May, during the court issuing this order there were Regional Director of HEC Nazeer Hussain and Secretary of NTS Waqar Sami Khan were present in the court. LHC further said that if any University or other private education department is going to appoint NTS for any purpose will assumed illegal like NTS.