In the following we’ll discuss about NTS is Non Profit Organization but earned 500 Million caught by Govt. of Pakistan. National Testing Service is a well known organization which is working for to conduct test for different educational institutes and for the recruitment of civilians in different Government and Semi Government Departments of Pakistan. It has earned Billions of Rupees from the students and unemployed candidates as test fee.

NTS also conducts entry test for higher education in Pakistan but in 2014 Lahore High Court ordered higher education department to conduct entry test by itself but NTS is still conducting test for different universities of Pakistan. As NTS is collecting huge amount as test fee from the students and from job seekers and recently it has announced that it is going to reduce test fee 20% which is good news for the students and job seekers but in the following you’ll have that this department is working illegally in Pakistan. 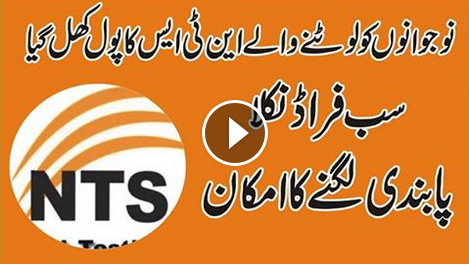 As we all know that NAB is in action that it is checking every department of Pakistan for to demolish the corruption and recently while investigating NTS it found that NTS is non-profit organization but it is earning millions every year from the time since it was established in 2002. It is exposed that this organization was established as testing organization under COMSATS but now it working separately and some Government Officers are involved in it and earning huge amount through it.

For to make our viewers more aware we have provided the video in the following where you’ll get complete report which is provided by Express News Channel and in the video there is complete detail is available that how much NTS has earned from 2002 to 2015. Watch the video and comment in the following comment box that is NTS working for Good or Not?