Today at this job page you will be having the latest career opportunity from Population Welfare Department Mianwali Jobs 2018 For Male & Female. Applications are being offered from the Population Welfare Department Mianwali is seeking and looking to hire the well disciplined, caliber and fresh applicants are required under disabled person quota are required to fill the following posts which are named as (Family Welfare Assistant (Male) and Family Welfare Assistant (Female)) are the current vacancies which require being filled by the applicants on contract basis for the period of one year and the applicants will be purely selected on merit basis. All of these posts will be filled in different and several Union Councils which can be seen from the advertisement. Both male and females are eligible to apply. Now have a look at its further details below.

Population Welfare Department is the Govt entity and as the posts belongs to Mianwali District so its working under the Govt of Punjab which is working for to aware the peoples about the planning and family growth affairs and the development of births and its control are the prime and main objective of this department. As, far as the vacancies are included which have been advertised includes from Graduation to Matric and those of low level like Middle, Primary and literate applicants are also invited to apply.

As the posts belong to BPS-05 Scale so the eligibility criteria are very simple as for Matric from a recognized institute and the Matric with 2nd Division is required.

Age limit should be 18 to 25 years is required with 5 years age relaxation will be given to Male and 8 years to females.

How to Apply for Population Welfare Department Mianwali Jobs: 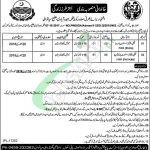