For all those who wanted to be a part of any defence force, we provide here Mujahid Force Jobs April / May 2016 Test Interview Date Latest Advertisement. Jobs in Mujahid Force are available and this time it is going to recruit numerous positions are its different centers such as Rawalpindi, Azad Kashmir, Gilgit, Chitral and etc. Candidates who wanted to be a part of Mujahid Force should appear for selection procedure as per the schedule mentioned in the following image but before any of you step forward to apply they should have to read the eligibility criteria mentioned in the following image such as those who wanted to apply for the post of Soldier should have minimum Matric degree, age between 17 to 23 years as on 26th September, 2016 and there are some other positions are also available such as for Trade Man and Sanitary Worker for which Middle and Primary pass candidates can apply. For further information about the required qualification, age and physical measurement please examine the following image posted below. Now in the following you’ll have complete who to apply procedure for all positions. 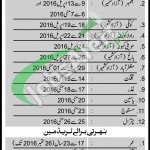