University of the Punjab

Jobs are vacant in University of the Punjab, Government of Punjab, Lahore. Latest Jobs in Punjab University Lahore 2015 For Stenographer. PU invites applications from Pakistani Nationals having Punjab Domicile for the following post such as (Stenographer BPS-14). Recruitment will be held on Regular basis and those candidates who already applied for the said post in March, 2015 have no need to apply again. Applicants should possess qualification intermediate or equivalent qualification from a recognized board and have speed of 80/45 words per minute in short hand and preference will be given to those candidates who have grip on Urdu shorthand typing.

Application form can be obtained from the official site of PU, duly filled application form along with a bank challan of Rs. 300/- should be deposit in the Habib Bank, detailed CV, attested copies of educational certificate, CNIC, domicile and two recent photographs should reach on the following address given below, before last date 19th February, 2015.

Applications received after due date will be rejected, no extra time will be allowed for postal transit. Shorthand test date will be announced soon and no TA/DA will be paid to any candidate for test / interview. Stay in touch with us and keep visiting our site JobsAlert.pk for further updates. 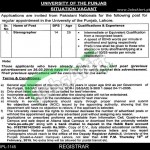