Here at this page you’ll have Join Pak Army as Civilian 2016 at 202 Army Aviation Group Quetta Cantt. Jobs in 202 Army Aviation Group Quetta Cantt are available and it is looking to recruit following civilian staff among the residents of Punjab and Balochistan who are well educated, hardworking and disciplined against the following positions such as (Stenotypist, LDC and Gardener). Candidates willing to apply first compare themselves with the eligibilities mentioned in the following image such as they for Sr. No. 1 and 2 FA, FSc is required but for the post of Stenotypist Shorthand course is compulsory and for the post of LDC short computer courses are required and for the Gardner Middle pass candidates having experience in the relevant field are eligible to apply. Age for all positions should be between 18 to 30 years. So, viewers it is the best opportunity for you to have job in Government Sector and most of all these positions are going to recruit as per the policy of Pakistan Army so it is confirmed that these positions will be recruit on merit basis and there is no need to use anyone’s reference or bribery. So, now you have to follow how to apply procedure given in the next heading which would lead you to apply against the vacant positions. 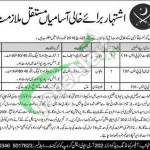