Currently, this force is looking to recruit Soldiers in Mujahid Battalion Rahim Yar Khan for which it invites the residents of Rahim Yar Khan, Bahawalpur, DG Khan, Rajanpur, Ghotki, Sukkur, Khairpur, Kashmore to step forward and make themselves part of the Mujahid Force and serve the nation by their bravery.

Candidates willing to apply should be physically fit and also possess the relevant eligibilities mentioned in the following image according to which candidate should be at least Intermediate / Matric pass but those with higher qualification will be preferred, age of candidate should 18 to 25 years, height should be minimum 5’ Feet, 5” Inches and chest measurement should be 32” Inches. So, viewers if you hold the above-mentioned eligibilities then you should apply as per the following how to apply procedure given in the very next heading. 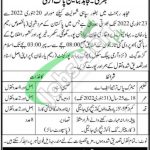