Jobs are vacant in Pakistan Army, Armed Corps Centre, Nowshera. UDC & LDC Jobs 2015 in Pak Army (Armed Corps Centre). A well reputed Government Department working under Pakistan is seeking for highly educated, well disciplined, self motivated and well disciplined candidates for the following vacant positions such as (Retired GCO, UDC, LDC and Driver). Applicants having valid domicile of Punjab, Sindh, Balochistan, Baltistan/FATA and Azad Kashmir are welcome to apply for the vacant positions. Applicants willing to apply must possess qualification and experience according to the criteria mentioned in the image posted below. It is right opportunity for all those who wanted to have job in such type well reputed Government Department.

Applications along with attested copies of all relevant documents such as educational certificate, experience certificate, CNIC, Domicile and recent photographs should reach on the following address given below, before last date 02nd February, 2015. Application must be accompanied by postal order of Rs. 300/-, applicants should mention clearly the position applied for on the envelope.

Applications received incomplete or after last date will not be entertained. After verification of documents only shortlisted candidates will be notified for interview according to the schedule and no TA/DA will be paid to any candidate. Applicants need to provide original documents at the time of interview. Stay in touch with us and keep visiting our site JobsAlert.pk for further updates. 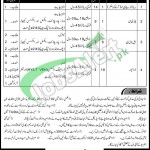