Application form for every post can be downloaded from the official site of NTS and submit it along with attested copies of all relevant documents such as attested copies of educational certificate, CNIC, Domicile, recent photographs and Deposit Slip on the following address given below, before last date 20th February, 2015.

Late receiving or applications received incomplete will terminate without any notification. NTS test date is not announced yet and it will be update soon as NTS is going to announce it. Candidates may prepare online for NTS test by visiting our site. Stay in touch with us and keep visiting our site JobsAlert.pk for further updates. 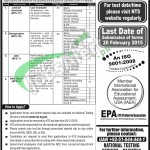