Here at this page you will get Punjab Provincial Transport Authority Lahore Jobs 2017 For Junior Clerk BPS-11. Applications are offered from the Govt of Punjab’s under working body named Punjab Provincial Transport Authority Lahore has announced the vacant situations for the Matric pass applicants which is named as (Junior Clerk BPS-11) is the position which needs to be filled by the applicants as soon as possible. Applicants will be hired on contract basis according to the policy of Govt of Punjab. Only natives of Punjab are welcome to apply. Only single vacancy is vacant to apply. Applicants who wants to apply needs to possess the Matric qualification with 2nd Division along with English typing speed of 25 wpm per minute but preference will be given to the computer literate. Age limit should be 18-25 years for this post and 5 years age relaxation will be given to the applicants according to the Govt rules. Now, let’s have a look on its further details below.

PPTA is abbreviated as Punjab Provincial Transport Authority Lahore is the Government entity which is under the administration of Govt of Punjab and looks after all the transport system in the Punjab Province. Being a Govt body it offers Govt jobs of different levels.

How to Apply for PPTA Lahore Jobs: 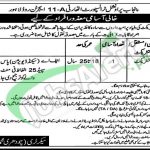