Applications are being offered from Population Welfare Department Toba Tek Singh Jobs 2017 For BPS-01 To 05. All those applicants who are looking and want to be the part of this department needs to come forward because the Population Welfare Department intends to hire the applicants against a Project named “Expansion of Family Welfare Centres (Community Based Family Planning Workers (2014-2018)” and for another Project which is entitled as “Construction of 11 Family Health Clinic Projects (2014-17) the following posts are vacant to be filled such as (Family Welfare Assistant (Female), Family Welfare Assistant (Male), Female Helper/Aya and Family Welfare Assistant (Female) for 2nd Project are the complete posts which needs to be filled with Matric qualification and no expertise are needed to apply for such posts. Age limit should be 18-25 year’s 20-35 year’s is required with 5 year’s relaxation will be given to males, 8 year’s will be admissible to females and 10 year’s age relaxation will be given to disable applicants. For 1st three posts the applicants should belong to the relevant mentioned Union Councils is necessary. Appointment will be made on contract basis according to the rules of Govt of Punjab. Now, let’s move on to have it’s further details below.

Population Welfare Department is the Govt entity and as the posts belongs to Layyah District so its working under the Govt of Punjab which is working for to aware the peoples about the planning and family growth affairs and the development of births and its control are the prime and main objective of this department. As being a Govt department it not only fulfilling its responsibilities but also provides career opportunities from Graduation to Matric and those of low level like Middle, Primary and literate applicants are also invited to apply. 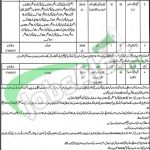