Here at this well known job page you will be having the latest job offer from Population Welfare Department Layyah Jobs 2017 For Male & Female. Applications are being offered from the Population Welfare Department Layyah intends to hire the applicants against a Project named Expansion of FW Centres (Community Based Family Planning Workers (2014-2018) on contract basis the services of male and female applicants are required to apply for the the following posts which are entitled as (Family Welfare Assistant (Male), Family Welfare Assistant (Female), Chowkidar, Aya & Community Based Family Planning Workers (Female)) are the current vacancies which requires to be filled by the applicants. All of these posts will be filled in different and several Union Councils which can be seen from the advertisement. Both male and females are eligible to apply. Now have a look on its further details below.

Population Welfare Department is the Govt entity and as the posts belongs to Layyah District so its working under the Govt of Punjab which is working for to aware the peoples about the planning and family growth affairs and the development of births and its control are the prime and main objective of this department. As being a Govt department it not only fulfilling its responsibilities but also provides career opportunities from Graduation to Matric and those of low level like Middle, Primary and literate applicants are also invited to apply.

For these simple posts the criteria is also simple as for all of these posts overall qualification is required includes Matric  and those of Middle qualification is required. For Community Based Family Planning Workers Married  females who is having the 2 children not more than that are eligible to apply. Divorced women and who got separation from their husbands are also eligible to apply and should be agree to undergo training in the relevant District Population Welfare Officer and the females also become agree on hanging the sign board of Family & Health Planning outside their door. Age limit should be 25 to 35, 18 to 25, 23 to 30 years is required with 5 years age relaxation to males and 8 years will be granted to females. Salary package of Rs.9000/ will be paid on account of good conduct 200/ rupees will be increased yearly.

How to Apply for Population Welfare Department Layyah Jobs: 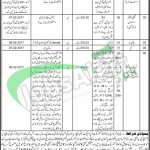