yyyyyyyyyyyyToday at this job page you will have Population Welfare Department KPK Jobs 2021 Shangla for Under Matric. Applications are being offered from Population Welfare Department KPK which is looking to recruit the following staff Shangla district and for this purpose, it is seeking to hire the well disciplined, experienced applicants are required to apply for the following positions given below.

Jobs to apply are named as (Aya / Helper / Dai (Female)) are the given government jobs that need to be filled on a temporary basis. Only domicile holders of the above-mentioned district are eligible to apply. Applicants will be given an attractive salary package with brilliant atmosphere and growth opportunities. All those applicants who are looking for such jobs so stay tuned to this job portal for more jobs. Now, I will let you know about its further details below.

Population Welfare Department of KPK is working under the Govt of KPK which is working for to aware the peoples about the planning and family growth affairs and the development of births and its control are the prime and main objective of this department. As, far as the vacancies are included which have been advertised includes from Graduation to Matric and those of low level like Middle, Primary and literate applicants are also invited to apply.

For the above post, Matric / Middle from a recognized board with relevant expertise is needed to apply. Age limit should be 18-40 years. 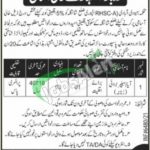