Here at this page we provide you Population Welfare Department Jobs 2015 Multan, Rawalpindi, Sialkot Punjab for the candidates having valid Domicile of Punjab District. Government of Punjab Population Welfare Department is looking to hire Theatre Nurse (Female) for different districts of Punjab such as (Attock, Bahawalnagar, Bahawalpur, Chakwal, DG Khan, Jhelum, Lodhran, Multan, Rahim Yar Khan, Rawalpindi, Sialkot and Vehari). Recruitment will be done on contract basis and duration of contract is extendable on satisfactory performance as per the policy of Government of Punjab. Applicants willing to apply should possess qualification BSC Nursing with 2nd Division or Diploma in Nursing from any reputed department. 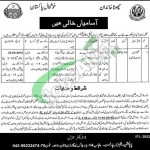