Here on 27th of December we are making you aware about the recent job offer from Population Welfare Department Chakwal Jobs 2017 Under Matric Add. For all the females who are Matric pass and are looking for the jobs so wake up and tap to this job page because the Population Welfare Department Chakwal is inviting the fresh, adroit, confident and eligible female applicants are needed to fill the post of (Community Based Family Worker (Female)) is required for this pot under the Project Management Unit for Extension in Family Welfare Workers & Introduction about the Community Based Workers (2014-2018) this post is required immediately to be filled. This post is needed in all the bundles of Union Councils and the names of such Union Councils can be viewed from the advertisement image. Now, i will make you know about its further details in the below headings.

As, it’s the well known Govt department named Population Welfare department which is owned and governed by the Govt of each  province in Pakistan which is held responsible for making different centers for the awareness of masses about the birth control issues and for this different health centers have been set up and many clinics are lying in each and every city for to aware the people about population issues. So, the above post is from Chakwal’s department so this is owed by the Govt of Punjab and offers all sort of opportunities for less and above level career offers.

Appointment will made on contract basis for the period of one year which will be extended on account of good conduct.

Salary package will be  Rs.9000/ will be given and upon good conduct of the applicants there will be increment of 200/ on annual basis.

How to Apply for Population Welfare Department Chakwal Jobs: 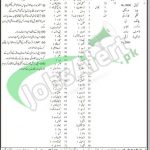