Here at this page you’ll have Pakhtunkhwa Energy Development Organization Jobs October 2015 Career Opportunities. Jobs in PEDO Pakhtunkhwa Energy Development Organization Peshawar and this government department is looking to recruit following positions for one of its project named 356 Mini Micro Hydro Power Project Northern districts of KPK from those who are highly educated, very experienced, hardworking and well disciplined for the following positions such as (Accountant, Office Assistant / Computer Operator, Sub Engineer, Accounts Clerk, Driver, Naib Qasid and Chowkidar). The appointment of the above mentioned positions will be on contract basis initially for one year and duration of contract is extendable on satisfactory performance and all positions are based at Northern District of Khyber Pakhtunkhwa and only KPK domiciled candidates are eligible to apply. Interested candidates are suggested to compare themselves with the eligibilities mentioned in the following image and according to the criteria candidates having qualification Masters to Primary are eligible to apply, because these positions are for everyone. So, only suitable candidates should apply as per the following how to apply procedure mentioned in the following heading. 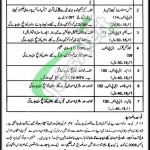