Graduate Assessment Test (GAT) conduct by National Testing Service (NTS) for the admission in MPhil and Ph.D. There is good news for the those students who appear for GAT tests by NTS, that they can pas GAT tests for M.Phil and Ph.D admissions in any university in Pakistan. Earlier, every student who wants to have admission in M.Phil and Ph.D, first had to pass the GAT conducted by NTS, but now student have to pass the entry test of the university and there is no involvement of NTS is required anymore. This is a very great relief for all students that they are far from GAT tests. According the details given to the HEC by the Lahore High Court dated 11th October, 2014 and 25th October, 2013 in pursuance of written petition No. 28028/2011 entitled, ‘Miss. Syeda Anam Ilyas VS Dr. Haroon Rashid’ that HEC issue notice to all universities about the relief announced by Lahore High Court for the students about the admission of M.Phil and Ph.D and also asked many questions about this announcement that they suggest about the testing body, nature of and scope of the test or this relief can regulate like the announcement under the ordinance?
HEC issued notices to all the Vice Chancellors, Rectors and heads of the degree awarding institutions to submit their suggestion in written before 13th December, 2013 date for the next hearing. 16 representatives of various big universities submit their suggestions in written based on this that “It is therefore, clarified that universities and other educational institutions are not bound to subscribe to the entrance examinations / test conducted by NTS. It is also an admitted position that NTS has not been approved by HEC to act as a Testing Body under the Ordinance”.

1) Copies of Lahore High Court, Lahore Orders dated 11.10.2013 and 25.10.2013 passed in written petition No. 28028/2011 entitled, “Miss. Syeda Anam Ilyas vs Dr. Haroon Rashid” etc are enclosed. The Lahore high Court, Lahore have issued directions to HEC to issue notices to the representative of Universities soliciting their response to the questions raised by the court before the next date hearing.

2) The question raised the Honourable High Court on the issue are as under:

3) The representative of the universities and institutions who have already appeared and made their submission on the above questions shall place the same in writing in honourable Lahore High Court, Lahore before the next date of hearing fixed for 13.12.2013. Copy of the replies so furnished may also be endorsed to the HEC well before the date of hearing fixed for 13.12.2013. 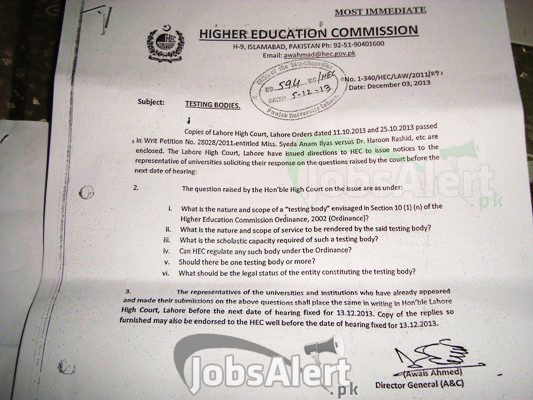