There in the following we’ll discuss about Ministry of States & Frontier Regions Jobs 2016 Punjab Sindh KPK Balochistan. Jobs in Ministry of SAFRON are available and it is looking to recruit following staff in the office of Chief Commissionerate for Afghan Refugees Islamabad for which it invites applications from the Pakistani Nationals who are highly educated, very experienced, hardworking and well disciplined candidates against the following positions such as (Stenotypist, Assistant, UDC, Driver, Dispatch Rider, Naib Qasid, Chowkidar and Sanitary Worker). All positions are on regional quota such as on Punjab, KPK, Sindh ad Balochistan. The appointments will be made purely on merit, transparency in the recruitment process at all level will strictly be observed. Candidates willing to apply should compare themselves with the eligibility criteria mentioned in the following image posted below and according to the criteria candidates having qualification from Graduation to Middle are eligible to apply and computer knowledge is must for all the posts at Sr. No. 1 to 3. For interested candidates we have provided complete how to apply procedure in the very next heading. 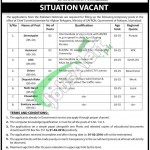