Latest Govt. Jobs are available in Population Welfare Department Punjab. Government Department working under Government of Punjab invites applications from the female candidates having Punjab domicile for the following vacant positions such as (Family Welfare Worker (Only Female)). Recruitment will be held on contract basis and department will recruit staff for almost 29 districts of Punjab and total 181 positions are vacant. Interested candidates should possess qualification minimum intermediate and should be well disciplined. It is good opportunity for all those candidates who are not well educated but still wanted to have job in such type of well reputed Government Department.

Interested candidates should submit their applications along with attested photocopies of all relevant documents such as educational certificate, character certificate, CNIC, domicile and recent photographs on the following address given below and last date for submission of application is 15th February, 2015. Applicants should mention clearly the position applied for on the envelope.

There will be no separate call letter will be issued for interview, interviews will be held according to the scheduled mentioned in the image posted below. Applicants should bring original documents at the time of interview. Stay in touch with us and keep visiting our site JobsAlert.pk for further updates. 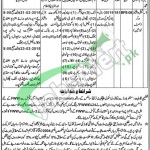