For the Pakistani Nationals we provide here Join Pakistan Navy as PN Cadet 2016 A Through Permanent Commission Test Result. Pakistan Navy Jobs October / November 2015 are available here at this page in it invites applications from the Pakistani Nationals to step forward and join Navy force as PN Cadet for Permanent Commission in Term 2016-A. As we all know that Pakistan Navy provides the chance for the citizens of Pakistan to join it twice in a year and here is the first chance for the year of 2016 that now all those candidates who well educated, physically fit and passionate can join Pakistan Navy. In the following we have provided all the requirements which are compulsory and every candidate have to fulfill these requirements to apply for the PN Cadet. So, viewers read the following instructions carefully and apply confidently for the job in Pakistan Navy because it you make your future brighter only by joining Pakistan Navy because it offers many facilities to you and your family members such as medical treatment, accommodation and Concession on traveling expenses. Let’s have a look on the Eligibility Criteria and required qualification.

Candidates should possess qualification Matric and F.Sc or O/A-Level with at least 60% marks. Interested candidates must have passed their F.Sc and A-Levels in following subjects given below. 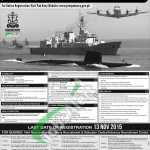