Here at this page we provide you Join Pakistan Army 2015 Jobs in Armoured Corps Centre Nowshera. Jobs in Armoured Corps Centre Nowsher are available and it has announced job opportunities for the both civilians and retired army officers having Punjab Domicile and due to this it is seeking for educated and skilled candidates for the vacant position such as (UDC, LDC and Driver). Candidates willing to apply for the post of Upper Division Clerk must have Intermediate degree with 40 words per minute computer typing speed, for the post of Lower Division Clerk candidates must be Matric Pass and have Computer Diploma and ability to produce 40 words per minute computer typing speed and for the post of Driver must have driving license. Only suitable candidates should apply as per the how to apply procedure given below. 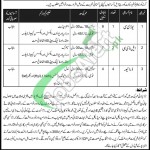