Here at this page you’ll have Join Pak Army Punjab Regiment Centre Mardan Jobs 2015 UDC LDC & Draftsman. Jobs in Punjab Regiment Centre Mardan are available and due to this it is seeking for highly educated, very experienced, motivated, determined and hardworking candidates for the following positions such as (JCO, UDC, LDC, Draftman, Civil Driver, Naib Qasid, Cook, Chowkidar, Class Attendant, Mali and Sanitary Worker). Punjab Regiment Centre Mardan has set different quota of local residents of Mardan, Punjab, Sindh, KPK, Balochistan, FATA / Gilgit Baltistan and for Minorities. Applicants willing to apply should possess qualification and experience according to the following criteria mentioned in the image posted below and only those candidates meeting criteria should apply otherwise applications will be rejected. 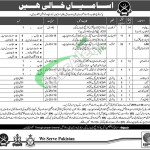