Jobs are vacant in School Education Department, Government of Punjab, Lahore. Govt of Punjab School Education Department Jobs 2015 Male & Female. Government department working for all the Government schools in Punjab and not this department invites applications from the citizens of Punjab for the following vacant positions which are on contract basis but extendable on satisfactory performance. Vacant positions are (Manager MIS, Assistant and Driver). All interested candidates must have Punjab domicile and relevant Qualification / Education according to the criteria mentioned below in the image. Women candidates are also encouraged to apply for positions serial no 1 & 2. It is wonderful opportunity for all those who desire to have job in any Government sector.

Applications accompanied by detailed Resume / CV, mentioning there in postal address, phone number and along with one recent passport size colour photograph and copy of National Identity Card, should reach on the following address given below. Applications complete in all respects should reach not later than 23rd January, 2015.

Incomplete applications in any respects and received after due date will not be entertained. Only suitable candidate fulfilling criteria will be contacted for test / interview and no TA/DA will be admissible for appearing in test / interview. Stay in touch with us and keep visiting our site JobsAlert.pk for further updates. 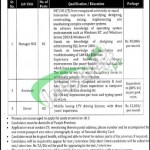