Here you’ll have Forest Department Punjab Jobs 2016 Okara & Depalpur Latest Advertisement. Jobs in Forest Department Punjab are available and it is looking to recruit following positions for Divisional Office located at Okara and Deparlpur for which it invites applications from the relevant district domiciled candidates who are educated and well disciplined for the following positions such as (Junior Clerk and Chowkidar). Appointment of above mentioned positions will be done on purely contract basis as per the recruitment policy of Government of Punjab and duration of contract is extendable on satisfactory performance. Candidates willing to apply for Sr. No. 1 should possess matric or equivalent qualification with typing speed of 25 words per minute and for the post of Chowkidar candidates should be literate. So, those who fulfill these requirements should apply as per the following how to apply procedure given below. 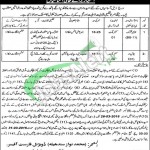