“our lord! Forgive me and my parrents, and (all) the believers on the day when the reckoning will be established – Quran 14:41”

Candidates meeting the criteria may send their applications along with attested copies of academic certificate, experience certificate , two passport size photographs, CNIC and Domicile on the following address given below, before last date 10th January, 2015. Candidates also have to attach Bank Draft of Rs. 100/- in favour of Commandant Combined Military Hospital Lahore. Candidates have to mention clearly the position applied for on the envelope. Only short listed candidates will be called for test / interview and no TA/DA will be admissible to any candidate for appearing in test / interview. Candidates have to bring original documents at the time of interview. Stay in touch with us and keep visiting our site JobsAlert.pk for further updates. 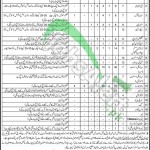