Get CMH Jhelum Jobs 2018 Combined Military Hospital Latest Vacancies. Civilian jobs are available under Pakistan Army in Combined Military Hospital Jhelum where applications are invited from the eligible candidates possessing relevant qualification and skills against the following positions such as (IT Supervisor, State Clerk, Medical Assistant (Male), Ward Boy, Barbour, Laborer, Gardner, Aya, Sanitary Worker (Male), Sanitary Worker (Female)). Hospital has set a separate quota for Punjab, Sindh, KPK and Balochistan and candidates from these provinces are welcome to apply if they fulfill the criteria. Appointment of above-mentioned positions will be on a permanent basis and those candidates wanted to apply should hold a qualification from Intermediate to Primary with relevant diplomas and experience as per the demand of vacant positions. So, viewers if you are looking to have a job in any Pak Army related department/ hospital/institute then it is right chance to cash it because here selection shall be done on purely merit basis and only eligible candidates will be appointed finally for the vacant positions.

CMH Jhelum stands for Combined Military Hospital Jhelum working under the supervision of Pak Army and it operates as per the rules of Pakistan Army. CMH Jhelum Jobs announced for both civilians and retired army officers and currently CMH Jhelum jobs for Civilians are available in the following.

How To Apply for CMH Jhelum Jobs: 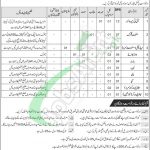