Here at this page you’ll have City District Government Rawalpindi Job Opportunities 2015 for Under Matric. Here is good news for all those who are not well educated such as under matric and looking for government job and for them City District Government of Rawalpindi has announce latest jobs for which resident candidates (disabled persons) of District Rawalpindi can apply and vacant positions are (Naib Qasid and Chowkdiar). Appointment of above mentioned positions are going to be done on purely contract basis and it is extendable on satisfactory performance. Candidates willing to apply should be minimum Middle or Primary Pass and age of candidate should be between 18 to 25 years but 10 years relaxation is available. So, viewers take advantage from this opportunity and because these jobs are especially for the under matric disabled persons who are residents of Rawalpindi District. So, only suitable candidates should apply as per the following how to apply procedure which is given in the next heading. 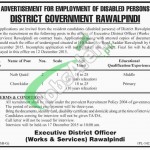