Here at this page you’ll have WAPDA Jobs 2016 Application Form Punjab Sindh KPK Balochistan. Jobs in WAPDA Water and Power Development Authority are available and it is looking to recruit following staff for Power Station Tarbela and the following positions are on contract basis and initially for one year which is extendable on satisfactory performance. For this purpose it invites applications from highly educated, very experienced, hardworking and well disciplined candidates for the following positions such as (A.S.A, Lift Attendant, Mason, Plumber, Pump Operator, Telephone Lineman, Carpenter, Store Helper and Bus Conductor). All positions are on different quotas such as it has set separate positions on (Merit, Employees Son, Disable, Punjab, Minorities, Sindh, Balochistan, FATA, Gilgit Baltistan and Azad Jammu Kashmir). Candidates willing to apply should possess at least Matriculation with relevant diploma and experience as per the vacant positions. So, for interested candidates we provided complete how to apply procedure in the following heading which would lead you to apply easily for the above mentioned positions. 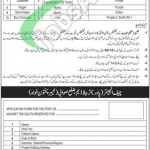