For the those who looking for Jobs in PPSC we provide here PPSC Jobs in Population Welfare Department 2015 Advertisement No 43/2015. Jobs in PPSC Punjab Public Service Commission are available as it is an Government Organization working with the purpose to recruit eligible candidates in different Departments working under Government of Punjab and for this purpose today we’ll discuss about PPSC Advertisement No. 43/2015 which is published in Jang Newspaper on 13th December, 2015 for which it invites applications from the Punjab domiciled candidates against the following positions which are available in different Government Departments such as (Health Department, Irrigation Department, Mines and Minerals Department and Population Welfare Department). Highly qualified and experienced Male, Female & Shemale candidates having degree in medical field can apply for the vacant positions and they have to fulfill the criteria mentioned in the following image. So, for eligible candidates we have provided complete list of vacant positions and how to apply procedure in the following paragraphs. 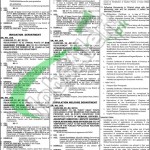