Here at this page you’ll have PPSC Deputy District Attorney Jobs 2016 in Law & Parliamentary Affairs Department. Jobs in PPSC Punjab Public Service Commission are available and it is looking to recruit following positions in Law & Parliamentary Affairs Department for which it invites applications from the Punjab Domiciled candidates for the following 20 Positions of (Deputy District Attorney (BS-18)), there are total 18 positions are on Open Merit, 01 post is for Minorities and 01 Position is for Disabled person. Earlier this advertisement was published on 22nd September, 2013 in Advertisement No. 14/2013 and now on 01st April, 2016 PPSC has announced the same positions again and those who applied earlier no need to apply again. Candidates willing to apply should possess qualification LLM or equivalent with at least five years active practice as an Advocate OR LLB with 50% marks or equivalent degree with seven years active practice as an Advocate is required. Both Male and Female candidates domiciled in any district of the Punjab meeting above criteria are eligible to apply and they have to apply as per the following how to apply procedure given below. 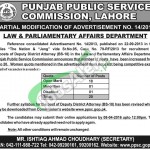