Here at this page a fresh job opportunity is being offered from Population Welfare Department Sargodha Jobs May 2016 Test & Interview Schedule. Population Welfare Department , govt of Punjab is seeking for the services of eligible applicants for their projects namely “Extension for Family Welfare Centre’s & Introduction for Community Based family Planning Workers” are the project for which the service of adroit, and experienced applicants are required to fill the following vacant situations which includes Chowkidar & Babysitter / Female Helper whereas for Project named “Family Health Clinic Sahiwal (District Sargodha)” the following vacant situations needs to be filled such as Driver, Babysitter / Female Helper & Sweeper are required with age limit of 18-25 and 20-30 years respectively. All those applicants who are going to apply for these posts will be hired on contract basis which can leads to further extension on the satisfactory performance of the eligible applicants. Age relaxation will be admissible to the applicants such as for 5 years to males and 8 years to females. Both gender are applicable to apply for these posts wherever mentioned. Only who possess the domicile of Sargodha are allowed to through application for the said vacancies. Now, let’s have a look below on its educational requirements plus applying method too further what they says.

As far as its educational requirements are concerned which are extremely simple as Middle pass  and literate individuals are eligible to apply for the said post and Driver must possess the LTV Driving License and should be well versed in driving will be eligible to apply whereas for rest of the posts the male as well as females both should be well equipped in their respective fields. 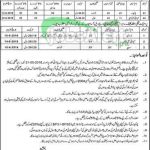