Today on 13th of October 2016 I am going to enlist the latest job offer from Population Welfare Department Muzaffargarh Jobs 2016 for BPS-01 to BPS-04.The Population Welfare Department, Govt of Punjab is inviting the applicants in its various district under the Project Management Unit for the Family Welfare Centre and to introduce the  Community Based Family Planning ample of the posts for which the eligible, adroit, caliber, capable and well known applicants are required to apply for the post of Community Based Family Planning Worker (For Females only), Aya and Chowkidar are vacant whereas and rest of the posts which are vacant according to the Director (PME) Population Welfare Department Lahore for Family Health Clinic Tehsil Jatoi Muzaffargarh for ADP Scheme Construction of 12th Family Health Clinic 2016-17 the vacancies are vacant to be filled includes Driver, Female Helper/Aya and Sanitary Worker (Female) are the posts which needs to be filled by the applicants. Overall really minimum qualification is needed for these posts as Matric, Middle and literate applicants are required to apply. Age limits are same as well as different for these posts. Appointment will be done on contract basis for single year which can be extended further on best conduct of the applicants. So, after having these details let’s have a look on its applying criteria below.

Vacant Situations in Project Management Unit for the Family Welfare Centre and to introduce the Community Based Family Planning: 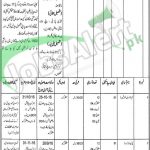