According to the criteria for vacant positions, Matric pass candidates ages between 18 to 30 years are eligible to apply. Age relaxation will be given as per Government rules. So, it is the finest opportunity for the residents of KPK who are well-educated but wanted to be part of any Government Department. Now, for eligible candidates, we’ll discuss how to apply the procedure for the above-mentioned positions.

How To Apply for Population Welfare Department Jobs: 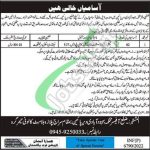