For the residents of Swat we provide here Population Welfare Department KPK Jobs 2015 Swat Employment Opportunities. Jobs in Population Welfare Department KPK are available, as we know that to have Government Jobs in everyone’s wish now a days and mostly jobs announced in major cities of Pakistan and those who are from the backward cities of Pakistan they don’t get chance for to have government job. So, here at this page we’ll discuss about the job for the residents of Swat District of Khyber Pakhtunkhwa. A well reputed Government Department named Population Welfare Department KPK is looking to recruit following staff for which it invites applications from only those candidates having domicile of Swat against the vacant positions such as (Family Welfare Assistant (Male) and Family Welfare Assistant). All appointments will be done on contract basis as per the policy of Government of KPK and there is fixed quota of 2% for disable person so they are also encouraged to apply. Candidates willing to apply should possess Matric degree and have age between 18 to 30 years. So, all interested candidates are requested to apply as per the following how to apply procedure given below. 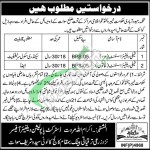