Vacancies to apply are for BPS-07 & BPS-03 named as (Family Welfare Assistant (Female), Dai / Helper). The recruitment of these positions will be done on a contract basis for which selected applicants will be appointed for a short time period i.e. one or two years but it can be permanent on the satisfactory performance of an individual.

What is Population Welfare Department KPK? it is a government body working in every province of Pakistan to provide awareness to the local residents of KPK regarding the family planning. To run this department it requires the huge staff for which it published different job advertisements in multiple newspapers in Pakistan. The jobs announced under Population Welfare Department should be assumed as a Government Sector Jobs which are going to be treated as per the policy of Government of KPK. 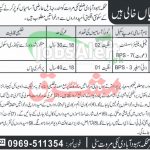