Jobs in Provincial Housing Authority named (Electrician, Plumber, Lift Operator, Security Guard, Work Mistri / Mason, Cook, Tube Well Operator, Sweeper, Mali) are the latest vacancies of this authority which require being filled with an overall qualification Matric / Middle and relevant expertise is needed to apply for such posts. The age limit should be between 18 to 45 years.

The appointment will be made on a contract basis which will be extended further for further years. Only KPK / FATA domicile holders are eligible to apply. An attractive pay package will be given to the applicants as per the scale of the post. Now, I will let you know about its further details below.

PHA is abbreviated as Provincial Housing Authority KPK is the Government authority which is under the Government of KPK and is responsible for maintaining the housing authorities in the province round acquisition of land preferably state land or the private lands which  and their development in plots which will be then allocated to the Govt and General Public at affordable rates. Being a Govt organization ample of the vacancies have been advertised by this authority of all levels for both the genders.

How to Apply for PHA KPK Jobs: 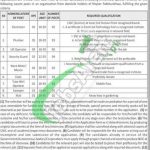