Here at this page you’ll have Pakistan Army Jobs in Quetta 2016 for Under Matric Career Opportunities. Jobs in Government Department working under Pakistan Army are available and it is looking to recruit following positions from the permanent residents of Balochistan having valid domicile and who are educated, hardworking and well disciplined against the following positions such as (Waiter, Cook Staff Mess, Cook Officer Mess and Sanitary Worker). Appointment of above mentioned positions will be done on purely contract basis which is extendable on satisfactory performance. Candidates willing to apply should compare themselves with the eligibilities mentioned in the following image such as they should have qualification minimum Primary with relevant experience to apply against the vacant positions. So, only suitable candidates should apply as per the following how to apply procedure given below. 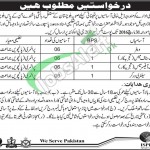