Appointment of the above-mentioned army jobs in Lahore City will be done on a pure contract basis and the duration of the contract is extendable on satisfactory performance. Candidates willing to apply should compare themselves with the eligibilities mentioned in the following image posted below and according to the criteria candidates should be at least a Matric pass and an LTV driving license, the age of the candidate should be between 18 to 30 years and should be medically fit. 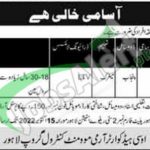