For Pakistani Nationals we provide here Pakistan Army CMH Okara Jobs 2015 Punjab, Sindh, KPK, Balochistan. Combined Military Hospital Okara is seeking for highly educated, very experienced, hardworking and well disciplined candidates for the following vacant positions such as (Database / System Administrator Technician, Medical Assistant (Male & Female), Ward Boy and Driver). Appointments are going to held on permanent basis and candidates should have valid CNIC and Domicile to apply. Applicants willing to apply should possess qualification and experience according to the criteria mentioned in the image posted below. It is golden chance for all those who wanted to have job in such type of well reputed hospital. 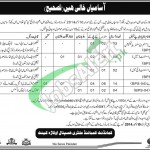