Here at this page we provide you Pak Army Armoured Corps Centre Nowshera UDC Jobs 2015 Punjab Balochistan. Jobs in Armoured Corps Centre Record Wing Nowshera are available and it is looking for highly educated, very experienced, hardworking and well disciplined candidates having Domicile of Punjab and Balochistan for the following position such as (Upper Division Clerk UDC). Both Civilians and Retired Army Officers can apply for it but they should possess qualification Intermediate with computer diploma, grip on MS word, power point & excel and should be able to produce 40 words per minute typing speed. Department has set age for both civilians and X-Army Officers such as civilians should have age between 18 to 30 years and retired army officers should have age upto 45 years. So, take advantage from this opportunity and apply as soon as possible for the vacant position as per the following how to apply procedure. 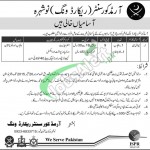