For all those who wanted to have job in NGO we provide here NGO Jobs in Pakistan 2015 PPHI People’s Primary HealthCare Initiative Quetta. A well reputed NGO in Pakistan named People’s Primary HealthCare Initiative (PPHI) has announced job opportunity and invites applications from the educated and experienced individuals for the vacant post of (Admin Assistant) which is on purely contract basis and based at District Support Unit Washuk. Candidates willing to apply should possess BA/BSc and Relevant Degree from HEC recognized institute and maximum experience in the relevant field. So, take advantage from this opportunity and apply in full confidence as per the following how to apply procedure and make your future successful by having job in such type of well reputed NGO of Pakistan.

Viewers in the above we have provided you complete information about NGO Jobs in Pakistan 2015 PPHI People’s Primary HealthCare Initiative Quetta in which job of Admin Assistant is available which is on purely contract basis and candidates with Bachelor degree can apply for it before last date 20th August, 2015 after registration procedure candidates should appear for interview along with all original documents on 24th August, 2015. Stay in touch with us and keep visiting our site JobsAlert.pk for further jobs. 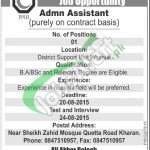