In the following you’ll have Lahore General Hospital Jobs January 2016 for Doctors Latest Advertisement. Jobs in Lahore General Hospital are available and it looking to recruit following posts for various departments working in Hospital and for this purpose it is seeking for highly educated, very experienced, hard working and well disciplined against the following positions such as (Senior Registrar, Assistant Anesthetist and Medical Officer / Woman Medical Officer). Recruitment will be made on adhoc basis according to Government of the Punjab, recruitment policy. Candidates willing to apply should compare themselves with eligibilities mentioned in the following image in which you’ll have information about the required qualification, experience and age. Candidates willing to apply should have qualification MBBS with other qualifications to apply against the relevant position. So, only eligible candidates should apply as per the following how to apply procedure given in the following image posted below. 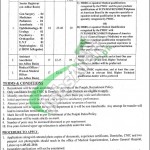