Here on 10th August, 2016 we provide you KPK Police Department Jobs 2016 Advertisement Latest Vacancies in Peshawar. KPK Police Department invites applications from retired army officers from the army rank such as Retired Colonel / Retired Lieutenant Colonel for the post of Director School of Traffic Management Kohat Having. Candidates will be appoint on contract basis for a period of two years and contract period can be extended on satisfactory performance of individual. Candidates willing to apply should be retired officer from Pakistan Army and have Commanded MP Unit for about 02 years, retirement period should not exceed more than 04 years and he must not be discharged / dismissed from Pak Army. After final selection Pay and allowances will be paid as per Government of KPK Finance Department instructions. So, viewers it is best opportunity for you to have job in Government Department after your retirement and here you’ll also be able to earn handsome salary and other package as per the KPK Police Department. So, those who are interested to apply are suggested to read the following applying procedure given in the next heading. 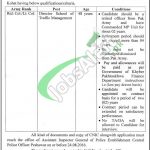