Here you’ll have a job opportunity to Join Pakistan Army Jobs 2015 in 477 Army Survey Group Engineers. As we all know Pakistan army is one of the best defense force in Pakistan and we all love and feel proud on our army because they protect us from enemies. And working in Pakistan army is an honorable or you can say valuable profession for everyone. In our country Mostly people like to work in army for the sake of respect. Now Pakistan army announces a great opportunities to work as a press technician of BPS-15, as a Cartographer of BPS-14 and as a topographical surveyor of BPS-14 etc. And qualification required for the corresponding jobs is Matriculation, F.A, Intermediate, Post Matric DAE and BA/B.Sc. and diplomas in the relevant field. Age of candidate must between 18 to 30 years but for retired army officers 30 to 45 years age is required. Vacant positions are only for Sindh, Rawalpindi and Islamabad. Some seats are open merit and some are divided into Sindh Rural and Urban. Now we are going to share vacant total vacant positions and complete how to apply procedure.

In the above material we discussed about Join Pakistan Army Jobs 2015 in 477 Army Survey Group Engineers. As we all know the Pakistan army has a great reputation in society every one give respect to army officers. Many people want to work in Pakistan army because of benefits that army give to his employee like medical facilities, Allowances , High wages for high scale officers and many more facilities. As we discussed all things that are necessary for you only for your ease, so please visit our website: jobsalert.pk 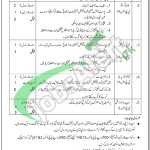