Applications written on plain paper along with attested copies of all relevant documents such as educational certificate, domicile certificate, CNIC and two recent passport size photographs should reach on the following address given below. Applicants should attach with application postal order of Rs. 200/- and last date for submission of application is 31st January, 2015.

Applications received incomplete or after last date will not be entertained. Test / Interviews will be held according to the schedule mentioned in the image and No TA / DA will be admissible for appearing in test / interview. Candidates should bring original documents at the time of interview. Stay in touch with us and keep visiting our site JobsAlert.pk for further updates. 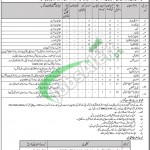