Here is good news for the Pakistani Nationals that Join Pak Army as Civilian 2015 Jobs in CMH Abbottabad Latest Advertisement are available. Combined Military Hospital Abbottabad is working under the supervision of Pakistan Army and currently it is looking to hire following staff on provincial quota and it invited applications from the candidates having valid Domicile of (Punjab, Sindh, KPK, Balochistsan, FATA, Kashmir and Gilgit Baltistan) for the following positions such as (LDC, Telephone Operator / Lineman, Medical Assistant (Male), Medical Assistant (Female), Wardboy, Driver, Sanitary Worker and etc). Candidates willing to apply should possess relevant qualification, diplomas and experience as per the requirements mentioned in the following image but there nothing to worry about it because candidates having qualification till intermediate can apply for any position but every candidate should have age between 18 to 25 years. So, if you are interested to apply for these positions then you are suggested to apply as per the following how to apply procedure. 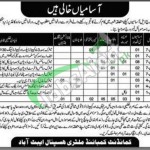