Here at this page you’ll have Join Pak Army 24 January 2016 at Ammunition Depot Skrund Latest Advertisement. Jobs in Ammunition Depot Skrund are available and it is seeking for educated, very experienced, hardworking and well disciplined candidates for the following positions such as (LDC, Civil Mechanical Driver, Tailor, Electrician, Carpenter, Painter and Metal Worker). Appointment of above mentioned positions will be done on purely contract basis and duration of contract is extendable on satisfactory performance. Department will recruit following positions on provincial quota such as there are some positions for Punjab, Sindh, KPK, FATA and Balochistan. Candidates willing to apply should possess relevant qualification and experience according to the criteria mentioned in the following image and according to the criteria candidates should have qualification Matric with relevant diploma and experience. So, only suitable candidates should apply as per the following how to apply procedure mentioned in the following heading. 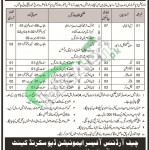