All the job seeking candidates which are having the knowledge of Computer along with passed matriculation or intermediate can apply and in Sibi and Turbat in both cities only 1 position is vacant for the mentioned posts. 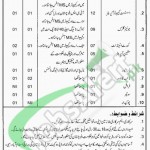