Here at this well known and famous job platform a brilliant news of job is there from High Court of Balochistan Jobs 2017 for BPS-17 Interview Schedule. Applications are being waiting for the candidates of Balochistan to come and serve in High Court who have given the applications before the following posts as (Assistant Registrar, Personal Assistant and Reader) are the current vacant situation which were announced formerly but as the T Written Test as been conducted at Balochistan Residential College at Turbat but now its for the Interview now which is going to be held next month. So, now i have given you the basic details . As, the result of the written test can be downloaded from the BHC website as www.bhc.gov.pk. Now, let’s throw light on its further details.

Balochistan High Court is the highest judicial institute and is above that all the courts and is serving number of the responsibilities which is lying in the Quetta city which is the provincial capital of Balochistan is performing its duties with great honesty and dealing all the judicial matters with great care and as far as vacancies are there so all sort of junior and senior level vacancies have been offered to the applicants.

For all these posts the applicants should possess the overall qualification of Graduation and Intermediate with relevant expertise are required to apply for such posts.

How to Apply for High Court of Balochistan Jobs: 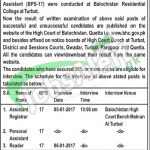