Here is the good news for the residents of Faisalabad that Health Department Punjab Jobs Faisalabad 2016 Test / Interview Schedule are available. Health Department Faisalabad announced these jobs earlier in the month July, 2015 but now it has announced jobs again and it has suggested to those who applied earlier no need to apply again, because their previous applications are useful. Health Department Punjab is looking to hire Faisalabad Domiciled candidates for the Tehsil Headquarter Hospitals, Rural Health Centers, Testing Laboratory and Government City Dispensaries. Here is the list of vacant positions such as (Driver, Midwife, Tailor, Tubewell Operator, Ward Servant, Naib Qasid, Chowkidar, Cook, Sanitary Worker, Laboratory Attendant, Sanitary Patrol and etc), all positions are on contract basis and recruitment will be done as per the recruitment policy of Government of Punjab. Candidates willing to apply should be matric pass but literate candidates can also apply for the vacant positions and preference will be given to candidates having knowledge and experience in the relevant field. 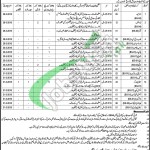